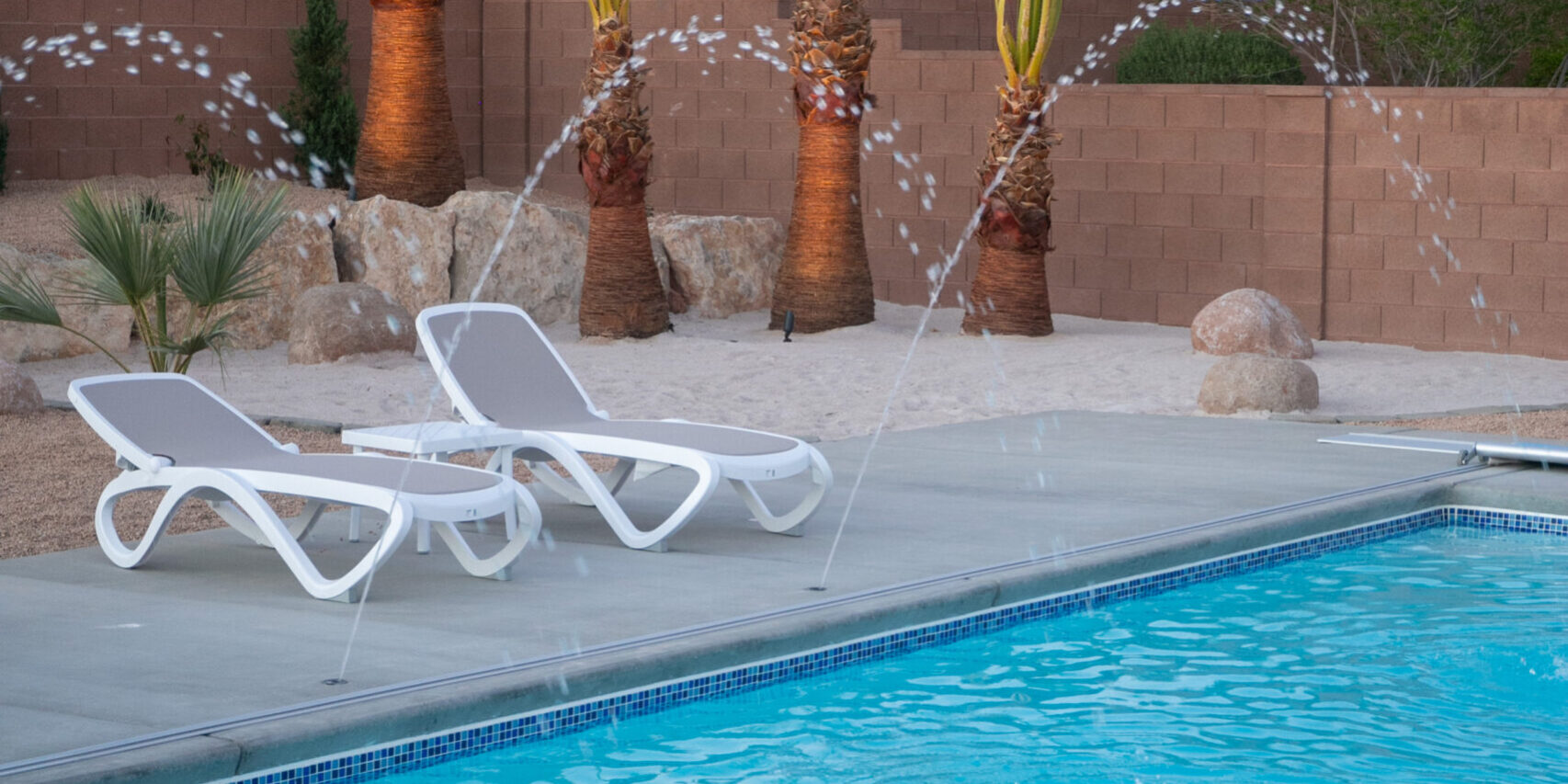 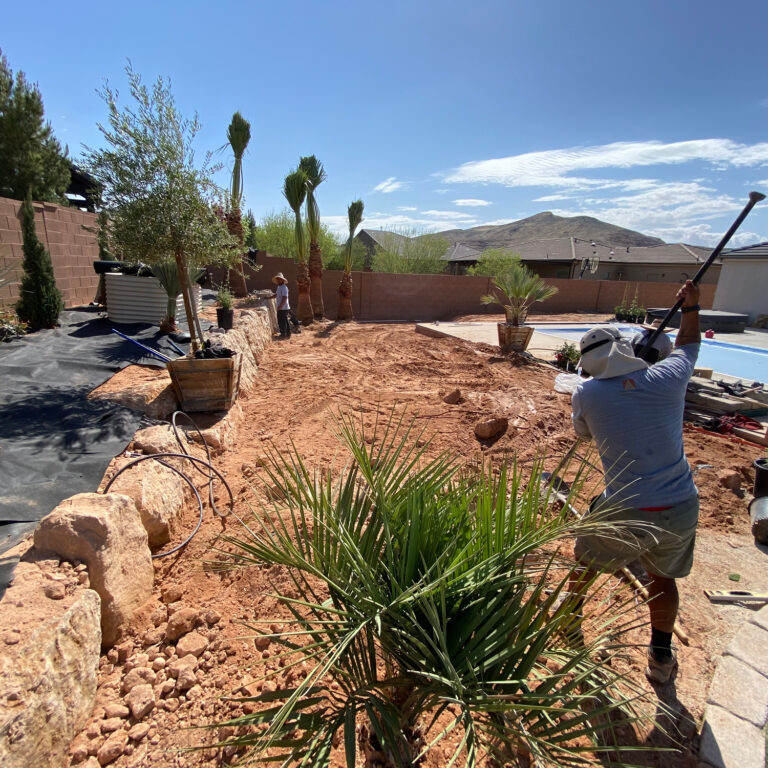 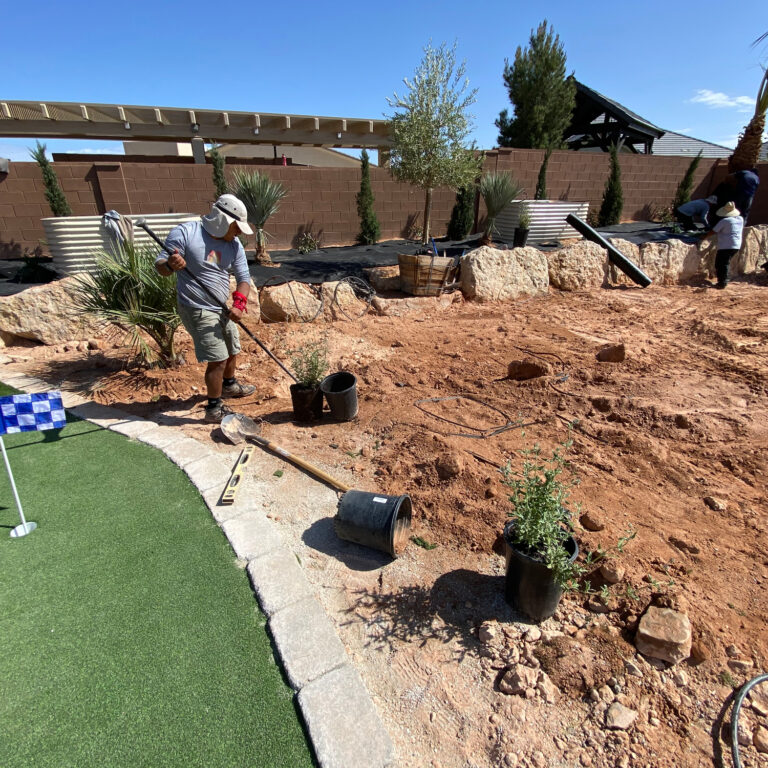 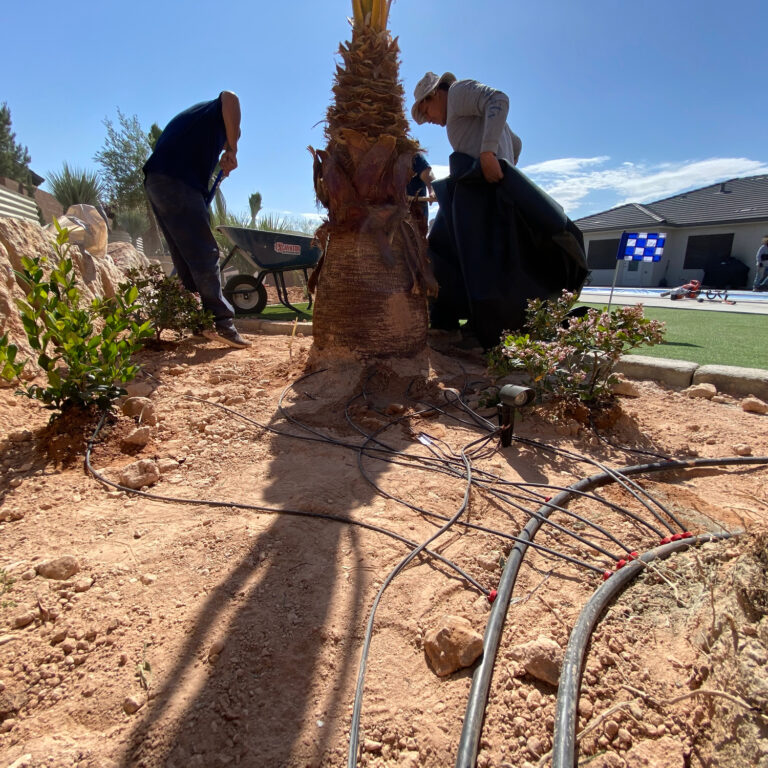 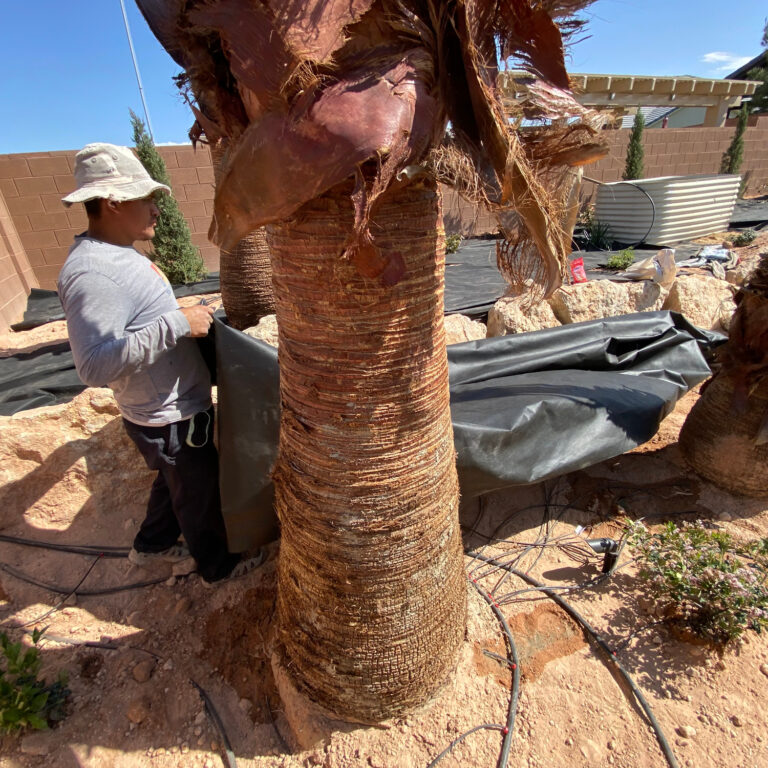 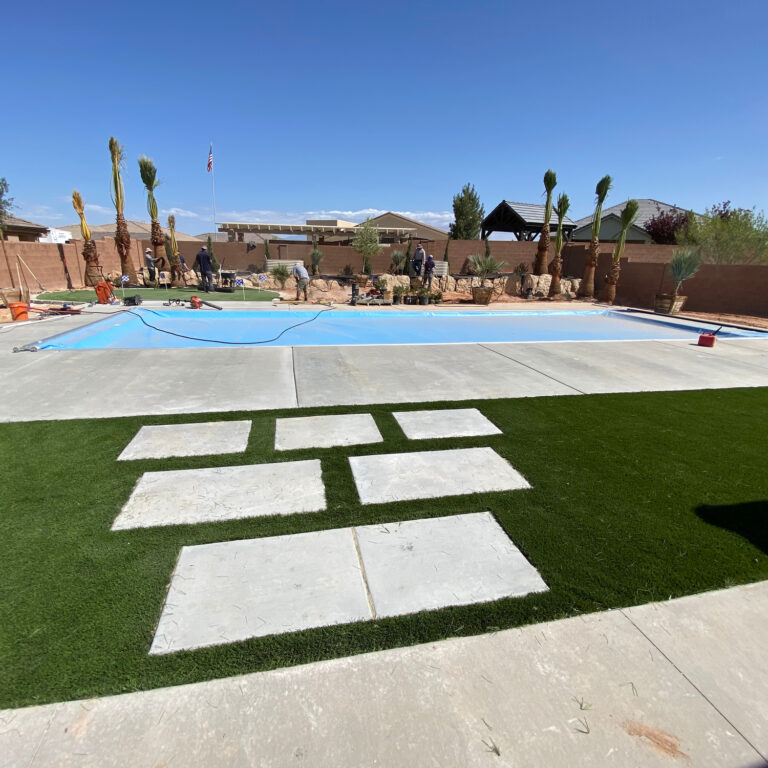 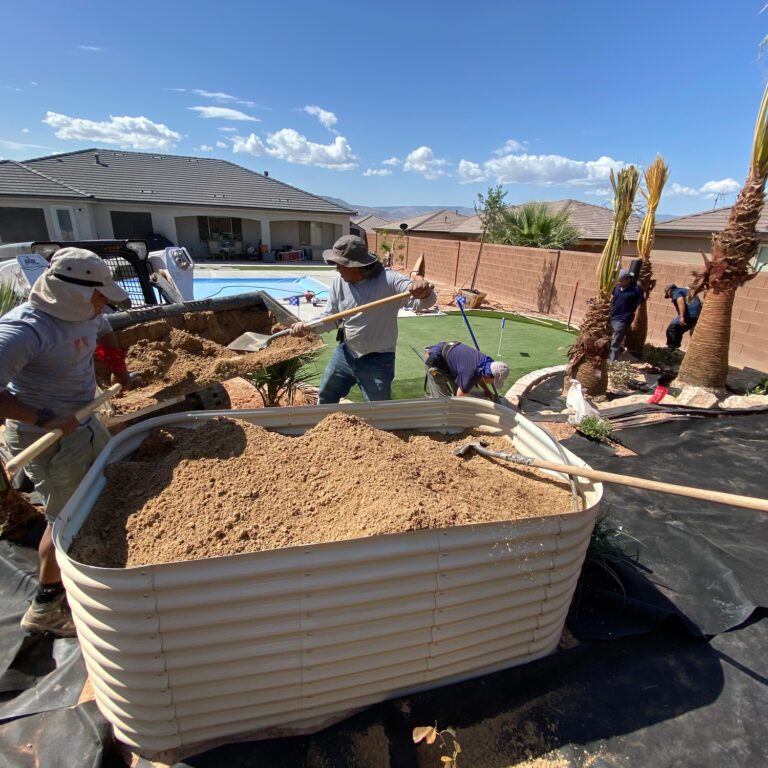 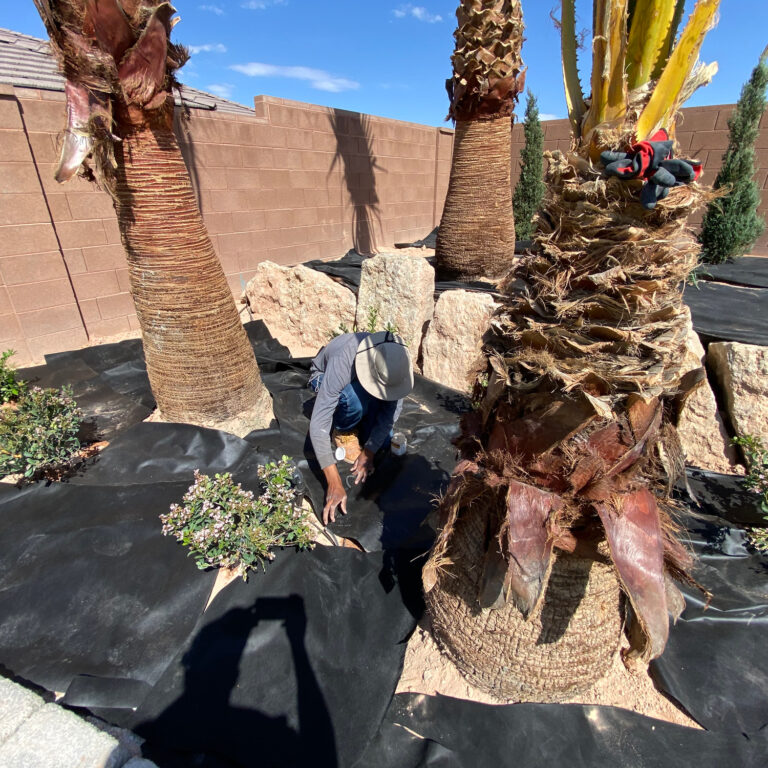 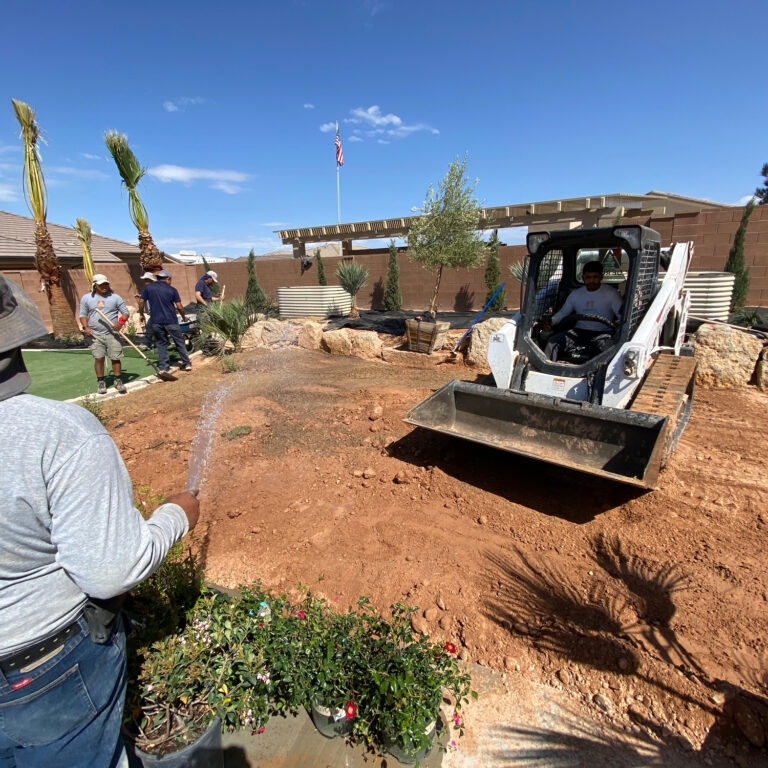 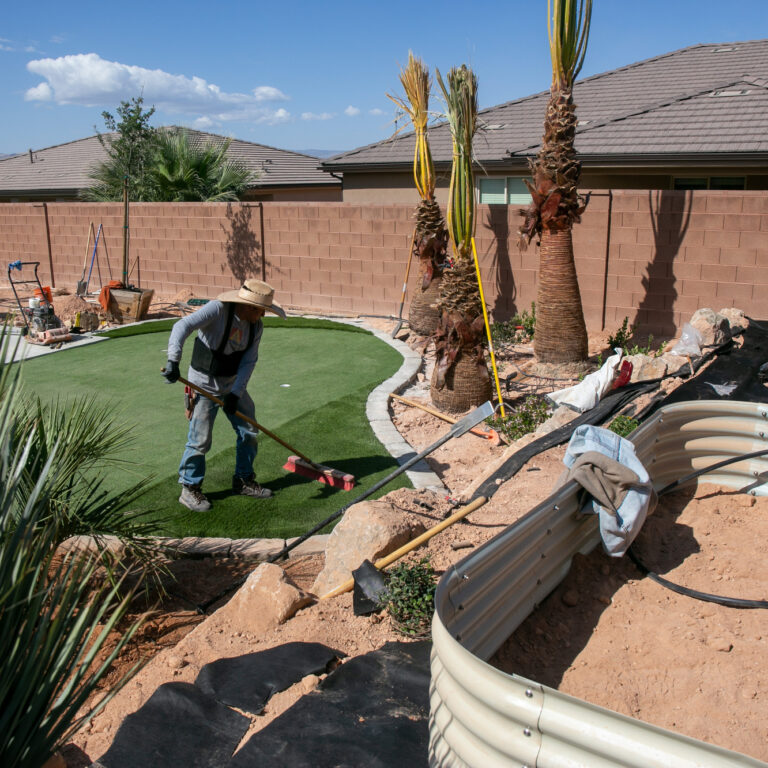 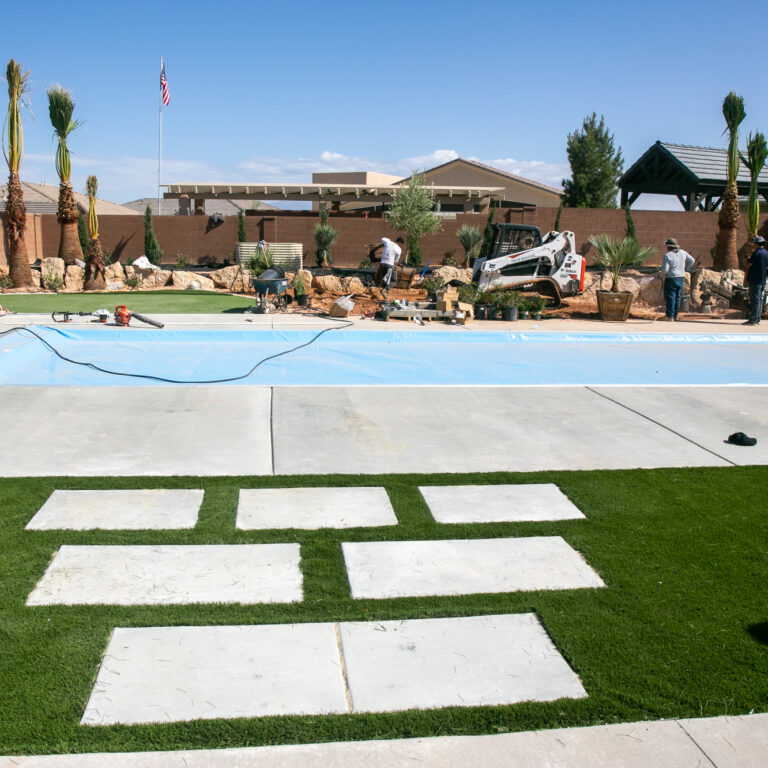 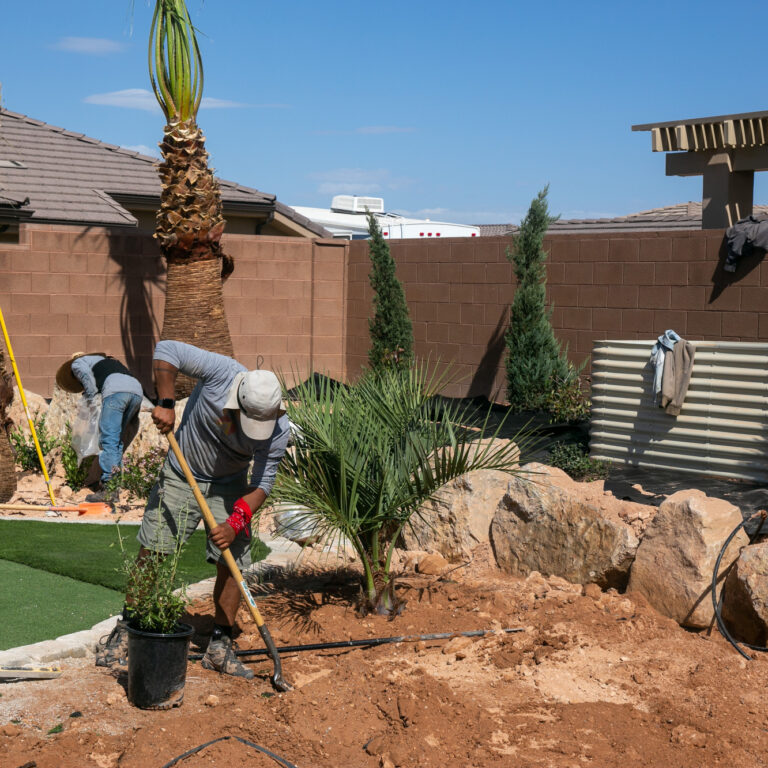 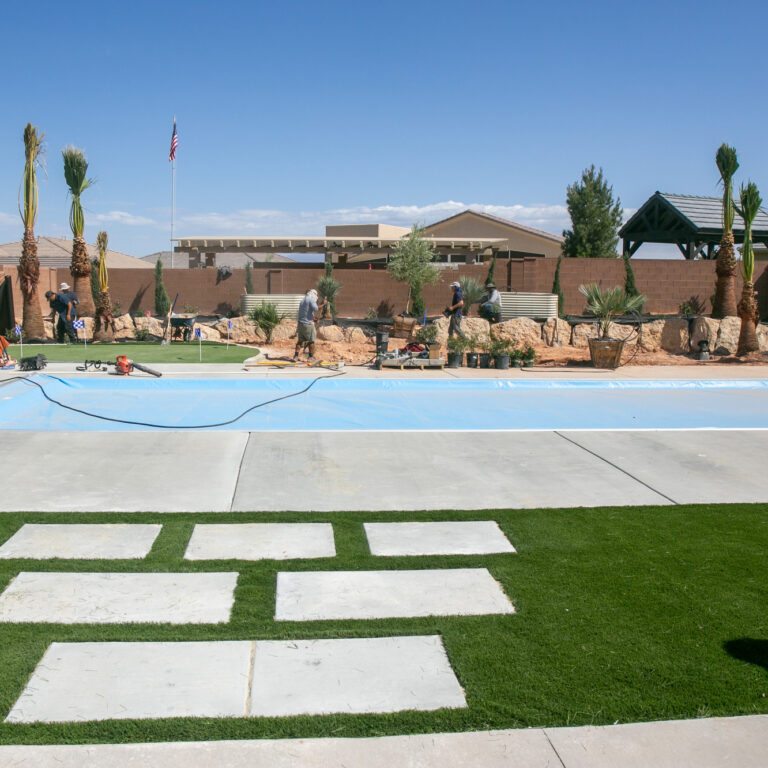 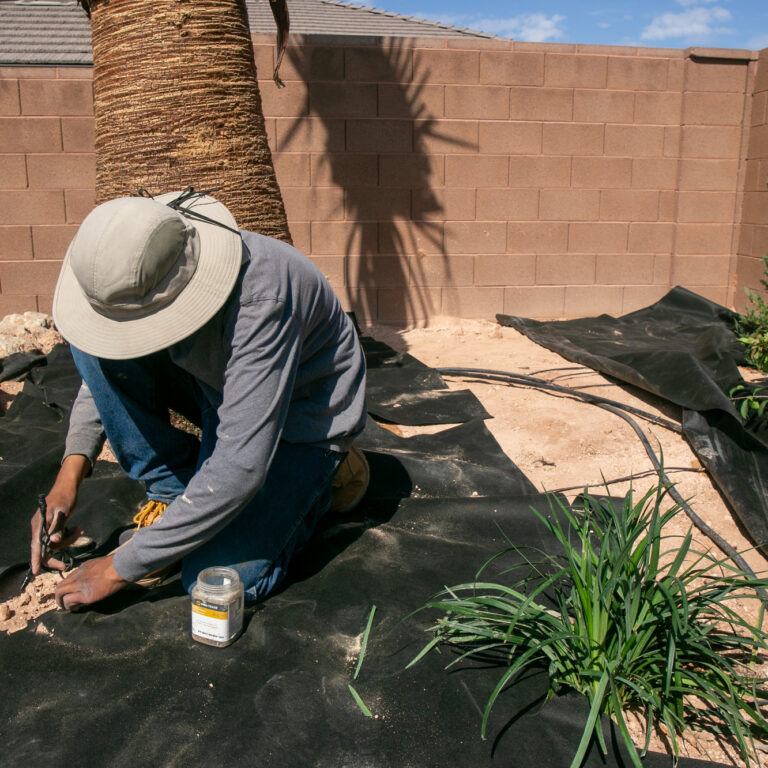 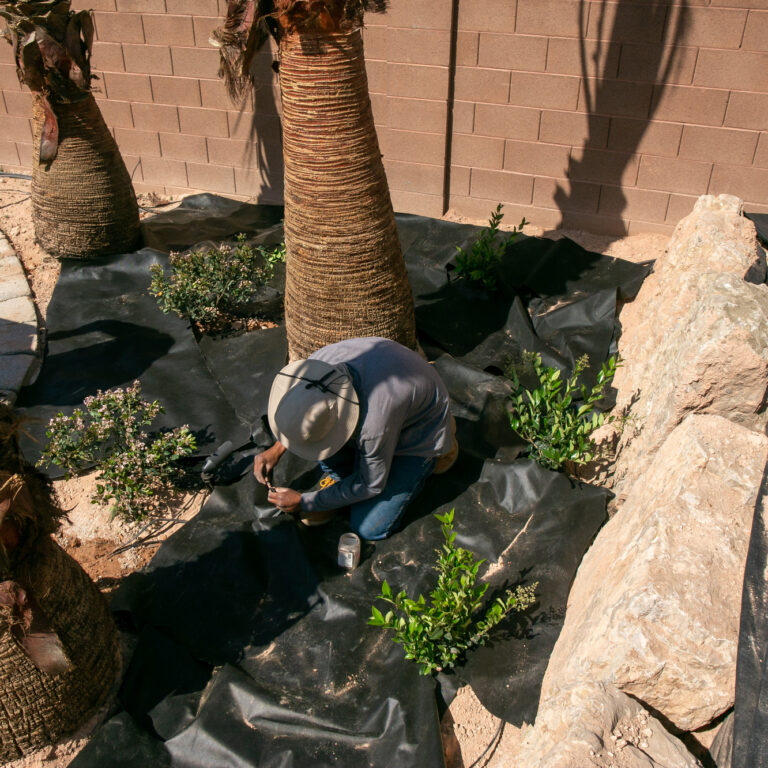 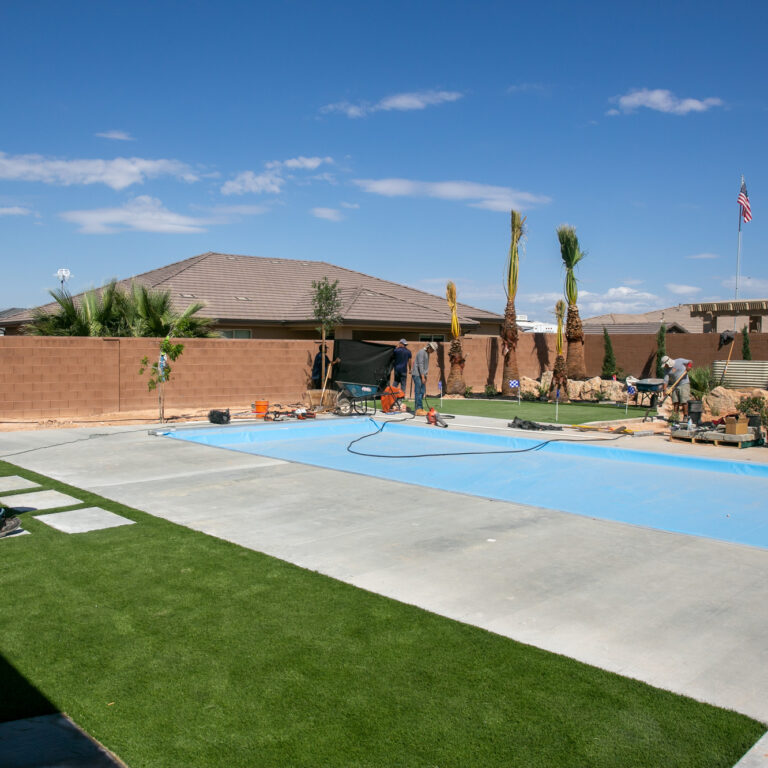 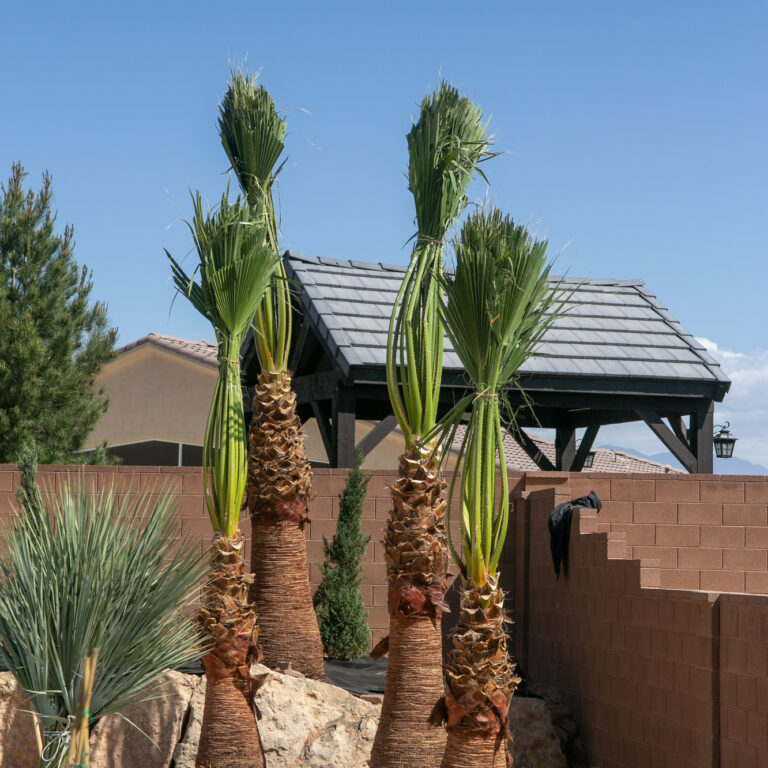 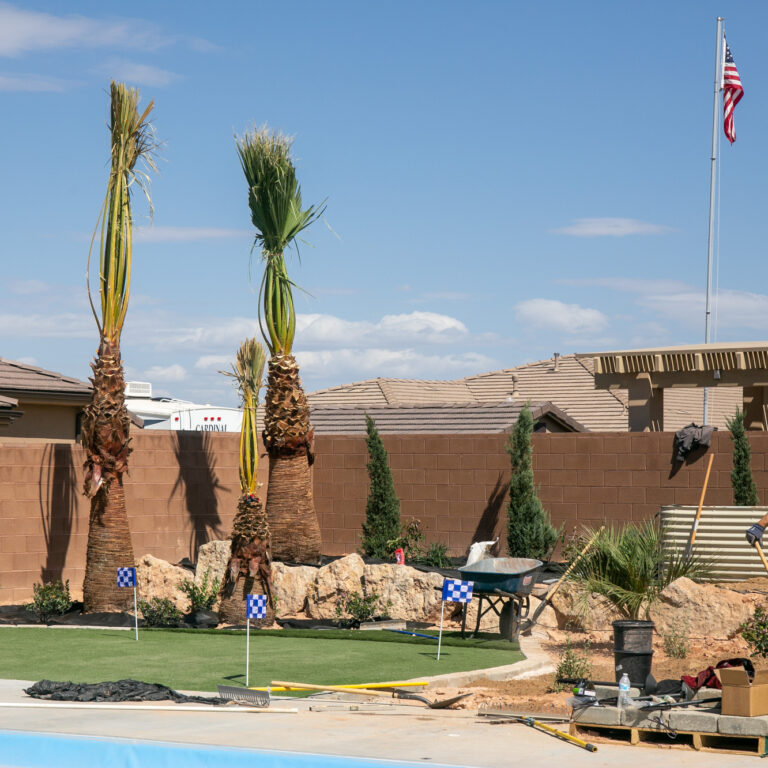 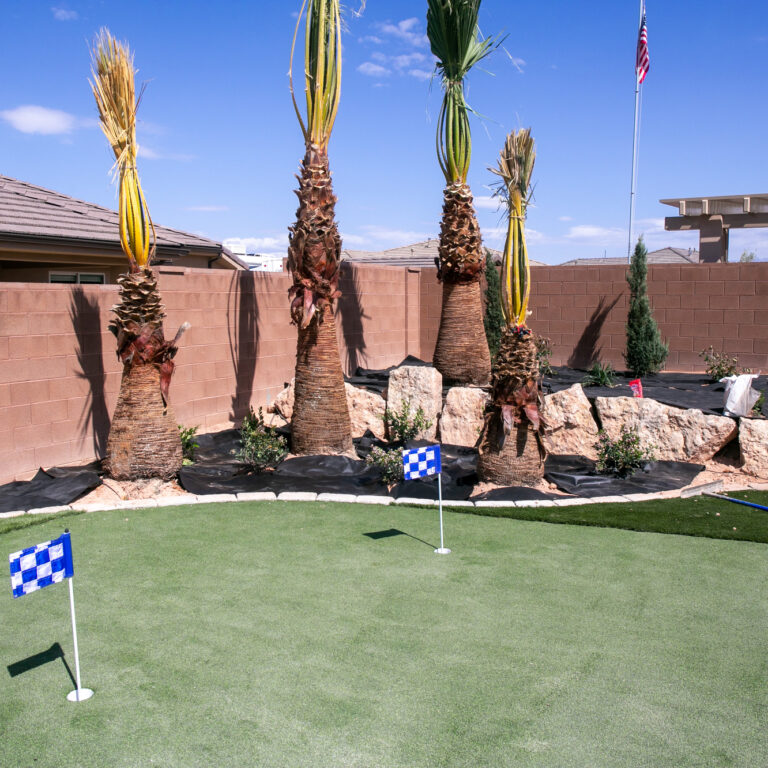 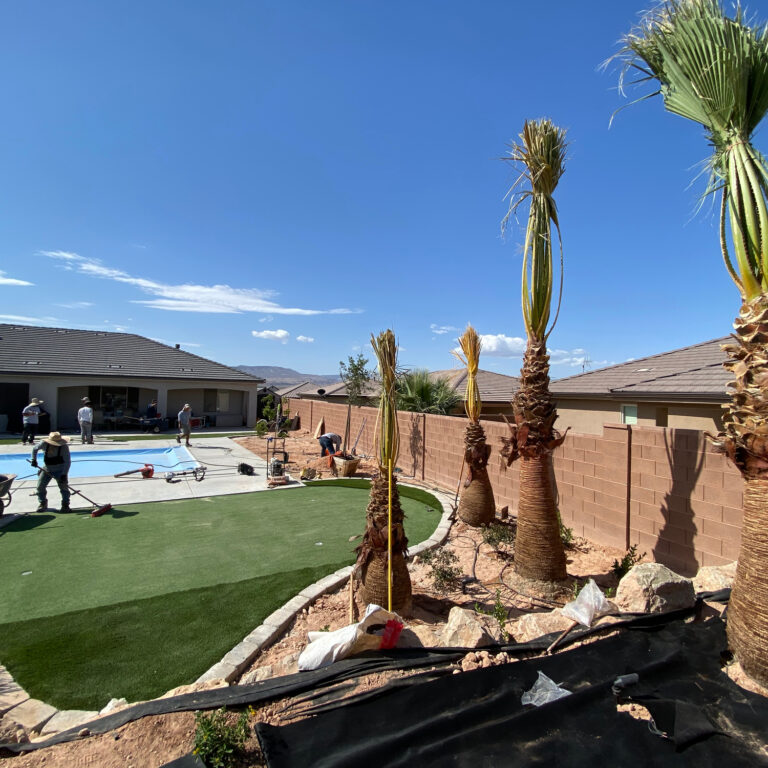 We finished up an amazing project last week. It’s on the south end of St. George and features a sandy spot for sunbathing just a few feet away from the new pool. So we’ve taken to calling it the “South Beach” project.

And just like the South Beach in Florida, our South Beach lights up spectacularly at night.

But why add a pool-side beach to a backyard in Utah? Well… why not?

When Michelle and Jeff moved to southern Utah from Kingman, Arizona, they had some landscaping ideas for their new spacious backyard. First off, a pool. Second, little to no maintenance. And once they were settled on those two things, the beach idea just seemed natural. “A beach and water – they just go together,” said Michelle when we asked where the idea had originated.

And now that the project fulfilling their southern Utah landscaping ideas is finished, Jeff and Michelle couldn’t be happier. “Steve is unbelievable,” said Jeff. “We had no idea it was going to be like this. He did an amazing job.”

As a means to achieve their goal of little to no maintenance, Jeff and Michelle chose artificial turf for the space between their home and pool and a pool-side putting green.
One last item Michelle and Jeff had on their wish list was a raised garden bed. “The weather (in Kingman) is exactly the same as it is here,” said Jeff. “We had raised garden beds made of wood and we were constantly replacing them. So we got these Vego garden beds.”
Set on the terraced portion of the backyard, the garden beds have drip irrigation and a walkway that lights up beautifully at night. Plus, they’re surrounded by beautiful palm trees. And again, the palms are lit to create a beautiful nighttime atmosphere in the outdoor space.

It’s been an amazing transformation, from nothing more than a dirt-filled empty lot when Steve and True Roots got to work, to an amazing outdoor space that extends Jeff and Michelle’s home by incorporating a literal backyard oasis.
“(The yard) had nothing. It was so ugly. But Steve can just envision it. He is just the master. It’s better than I thought it was gonna be. He did his job. He’s not cheap but you get what you pay for,” said Jeff. “Plus, he’s just such a nice guy.”
Categories: About True Roots, Landscape Lighting, Landscaping ProjectsBy True RootsMay 12, 2021
Tags: beachFire PitlandscapelightingpoolterracedTurfwaterfall

The Benefits of Artificial Grass
June 6, 2022